Have a great stay in Cambodia!

Siem Reap is a popular tourist destination because it’s only a few kilometres from Angkor Wat temple. A few million people travel to see Angkor Wat every year and the town is a bustling mix of restaurants, tourist attractions, markets, and many more things to see and do. Here is some advice to help your stay be as smooth as possible.

Cambodia has two main seasons – the wet season and the dry season. The wet season arts in around April and May and finished towards the end of October and the beginning of November. However, it can rain at any time of the year, the storms are heavier and more frequent during the rainy season.

The dry season is the coolest part of the year and December and January are particularly cool. The temperature can sometimes drop to the 20 degrees Celsius or less during the night and early in the morning. However, it will often pick up to the mid to late 20s during the day time.

It doesn’t matter whatever time of year you come to Siem Reap, the sun is strong and can cause sunburn. Always, make sure you’re protected from the sun by wearing long clothes, a hat, and use sunscreen. Even if it’s overcast, you can still get sunburn, so cover up and try to stay cool!

Cambodia uses a dual-currency system where both Khmer Riel and US Dollars are widely accepted. The exchange rate is usually around 4,000 KHR to 1 USD. Only US notes are accepted and coins are not usually accepted. You’ll find that in most cases where you pay in US Dollars, you will be give change in a mix of Dollars and Riels. It’s important that you ensure all your notes are in good condition because marked or torn US dollars are not accepted. If somebody passes you one, then you might not be able to spend it easily. This is not the case for Khmer Riel where virtually any note is readily accepted.

There are ATM machines and banks around the town where you can withdraw money. Many hotels and shops also take credit cards. However, as you leave the main towns, you’ll find that credits are not so widely accepted and it’s always best to carry enough cash on you for what you need for the day.

Most people who pass through Siem Reap come without any incident. Siem Reap is a relatively safe town and violent crime against tourists is extremely rare. There are, however, isolated reports of non-violent crimes and scams. Bag snatchings and street robberies often increase before the main holidays, Khmer New Year, Pchum Ben, and the Water Festival. In most cases, women are targeted for their handbags. So, try to not carry a bag around with you and be careful where you walk at night.

There are also some low-level scams in operation in the town including the now-infamous milk powder scam. You’ll be approached by a young person holding a baby. They will tell you that they don’t need money, but need milk powder for their baby instead. They will take you to a supermarket where you will buy the milk and they will then return it after you have gone. Both the scammer and the supermarket keep some of the proceeds.

During your tour, we’ll provide all transportation. We can also provide airport transfers if required. When you are exploring Siem Reap town on your own, there are plenty of transport options available. The most popular choice is a tuk tuk, you’ll find them on virtually every street corner. You can haggle the price. There are also bicycle hires widely available and electric bikes are also available.

Most nationalities can get visas on arrival or prior to their arrival. If you want to buy an e-visa for Cambodia before you arrive, you can do so here.

See three of the most popular temples in Siem Reap. The beautiful Banteay Srei temple is made from pink sandstone and the fine carvings are so stunning that you won’t see anything else like them in Cambodia. We’ll also see the ancient city of Angkor Thom as well as the popular Ta Prohm temple.

This is a great tour if you want to save money and see all the popular temples of Angkor with a professional English-speaking tour guide. Transportation is also included for the whole group. See the most popular temples in the park – Ta Prohm, Bayon, and Angkor Wat.

This shared tour will take you to see some of the oldest temples built by the Khmer people. The three temples at Roluos were built a few hundred years before the famous Angkor Wat and you’ll get to see some fascinating temples with Bakheng, Preah Ko, and Lolei.

On this shared tour, you can get the sunrise experience with a tour guide and full tour of Angkor Wat, Angkor Thom and Ta Prohm. You’ll see the main temples of Angkor with a professional English-speaking tour guide and transportation provided on this money-saving shared tour of the temples including sunrise.

You will visit the Angkor Archaeological Park one full day and enjoy three days of relaxing activities in Siem Reap including massage, meditation and yoga classes.

Get off the beaten track and into the real Cambodian countryside with this local village and local market tour. You can experience the local village way of life and see traditional farming communities. We will also visit a local market where you can learn about the fresh produce on offer and even buy a gift! 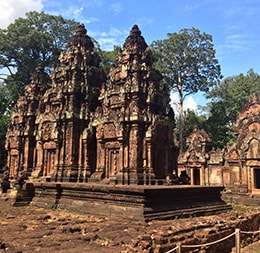 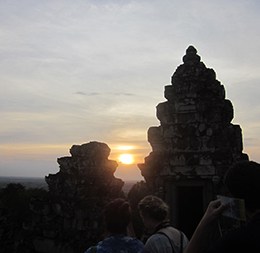 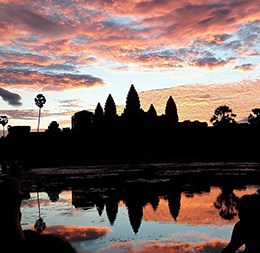